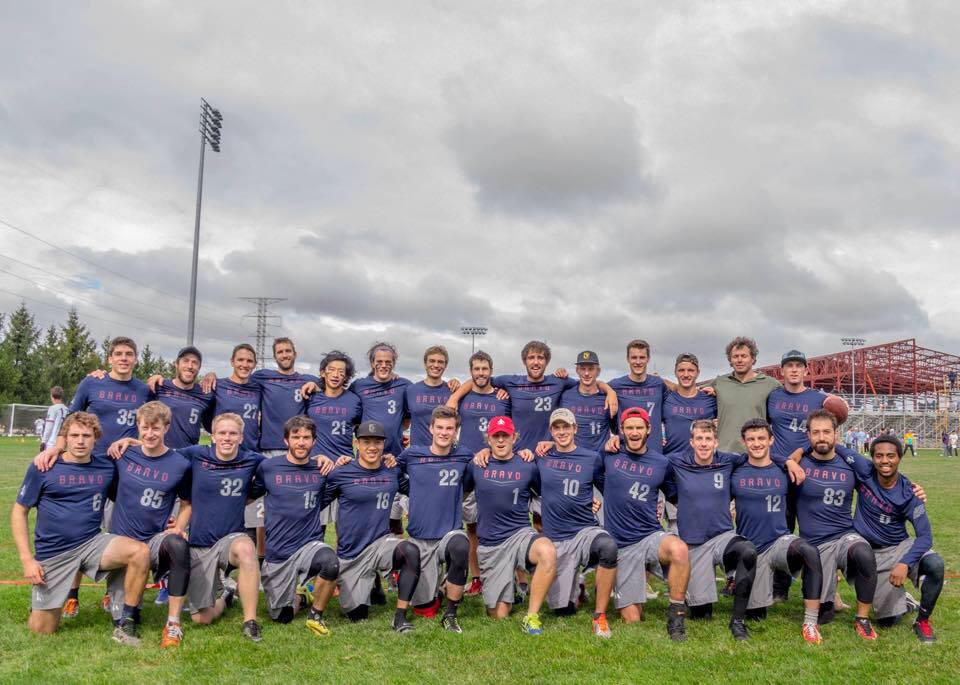 Johnny Bravo was founded in 1996 by Dan Ackerstein, Wes Williams and Dan “Jello” Revelle.  (Note- Johnny Bravo was not named after the popular animated television series which first aired in 1997.) The team was founded on vengeance by castoffs from the top Boulder-area team, Secret Squirrel. Johnny Bravo quickly overtook their rivals and began their reign as the top elite team in Colorado, qualifying for Nationals in 1997. Bravo split into two teams (Bravo and Gun Club) in 1998 and failed to qualify for Nationals after falling to the Santa Barbara Condors in the final and Los Guapos from San Diego in the backdoor game. Bravo and Gun Club reunited in 1999 and took the name of the old Boulder team, Secret Squirrel. After a disappointing 15th place finish at nationals in 1999, the team reclaimed their Johnny Bravo identity in 2000. Bravo has qualified for Nationals every year since 2000, a feat surpassed only by Raleigh’s Ring of Fire (1997). Bravo quickly established themselves as a top tier team, placing no lower than 7th at Nationals between 2001 and 2005. In 2006 the team reached their first semifinal, falling to Sockeye in a heated game. They faced Sockeye again in the finals in 2007 and semifinals in 2008, but could not close the door on their archrival.

Following those heartbreaking seasons, many Bravo greats hung up their cleats and new leadership stepped in to run the team. Bob Krier took the reigns as coach and began to implement new systems and philosophies. Though the team struggled from 2009 to 2012, they slowly started to build a new identity under the leadership of captains Josh “Richter” Ackley, Ryan Farrell and Jack McShane. Johnny Friendship broke through to the semifinals again in 2013, falling to perennial favorite Revolver. The team entered 2014 hungry for a title. In a double-peak year, they fell in the semis again to Revolver in a tight, back-and-forth game. After a few weeks off and a poor showing at Pro Flight Finale, the team regrouped and got back to the basics, taking the Club Series one game at time. They ended up not losing around game on their way to the 2014 National Championship.

Johnny Bravo has a strong relationship with the University of Colorado’s Mamabird.  Many of Mamabird‘s top players started playing for Bravo midway through their college careers. The partnership has benefited both teams as Mamabird has become a perennial national championship contender. Bravo also draws top talent from across the nation as recent graduates move to Colorado for the Rocky Mountain lifestyle and elite ultimate opportunities.

Johnny Bravo has established itself as one of the premier club teams in the country and continues to produce top talent, year after year. They realize that natural talent and athleticism can get you far but hard work and brotherhood will help you rise to the next level.